After a very busy February, things are a little quieter this month, but there’s still plenty to whet your Derby appetite. Most of the action is concentrated around the weekend of the 11/12th and it’s from there we’ll take a look at the spotlight game of the month.

Spotlight Game: LRD A vs DRD A 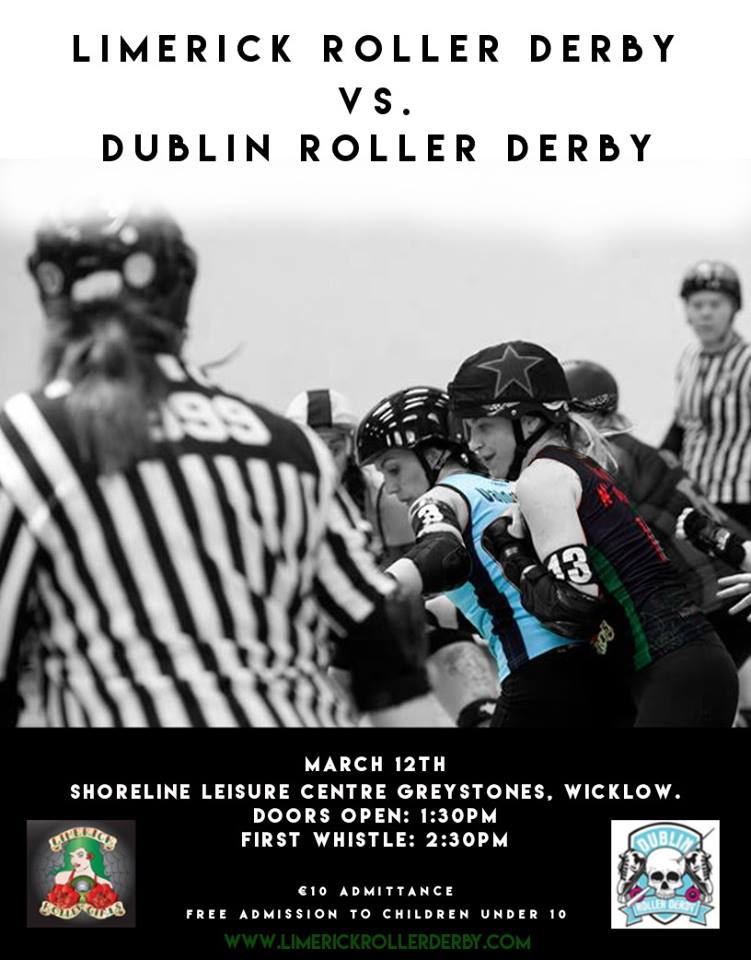 Limerick Roller Derby were accepted into the WFTDA apprentice programme in October last year, making them the third league on the island (after Dublin Roller Derby and Belfast Roller Derby, now both full members) to become a member of the global body. This game will be a mock sanctioned WFTDA game (meaning it’s played and officiated as if it were an official WFTDA sanctioned game). It’s one of the requirements of graduating to full membership, and it’s absolutely BRILLIANT that they don’t have to go abroad to do it! It won’t have any bearing on spectating, so come along to the lovely Shoreline Leisure Centre in Greystones on Saturday 12th March. Doors are at 1.30pm and first whistle is at 2.30pm.

As a single-header with a mid-afternoon start, this is a great chance to have a look at some of the best players in the country. Taking a look at the match-up, the teams have never actually played each other as Limerick are usually matched with the DRD B team. DRD are almost guaranteed a win – their A-team is currently placed 18th in Europe with Limerick at 81, but Limerick don’t give up and have surprised DRD B in the past with their tenacity. I predict a win for Dublin, but a strong performance from Limerick.

_4th, 11th, 18th March _– Waterford City Viqueens are holding “Four Fridays” for people interested in Roller Derby to turn up and give it a try.

I forgot to add away games last month (despite being asked to, SORRY) so big shout outs to all the leagues and teams who jetted off last month.

Belfast Roller Derby were representin’ at the first round of Tier 2 British Roller Derby Championship games. They’re still finding their feet after being promoted to Tier 2 but they’ll be hoping to improve on their first game when they take part in their next game day at the end of April.

Dublin Roller Derby are just back from what sounds like a brilliant time in Stockholm where they took part in the Why So Serious Spel!, playing two very tough games against two highly ranked teams – including Stockholm AllStars, currently ranked 4th in Europe, 20th overall in WFTDA. Yes, that’s kind of a BIG DEAL.

As always, if I’ve left out your event or I’ve made a mistake, please get in touch. This month I’ll DEFINITELY fix them! And I owe you a column on venues. Another time!

comments powered by Disqus
A guide to voting in GE16 Time to talk?