Happy Magazine is a new title that you won’t find in your local newsagents. It’s a magazine that is for people who have cancer - before, during and after treatment. It’s the brainchild of Holly Kennedy, herself a cancer survivor, and it’s intended to be a positive support to people going through their treatment. The second issue is available now free of charge - for a list of places you can pick one up, go to Happy Magazine’s distribution list. 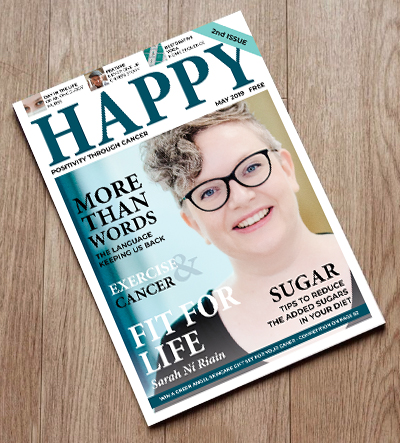 And, well, if you do pick up a copy, you might spot that the cover features, well, me. At the start of this year I took part in the Beacon Hospital’s Fit For Life programme, which is an exercise & health programme aimed at people who are undergoing or who have completed treatment for cancer. When Holly asked if she could do a feature on the programme, the director (ace physio Sarah Wright) asked me if I’d come in and chat, because, well, if there’s anything I’m capable of doing, it’s that.

Sarah also asked if I’d be OK with being photographed. I’d actually bought a new gym top and had worn a little makeup as I thought there might be a couple of pics taken, but I wasn’t expecting a full-on photoshoot with a professional photographer. It’s not something that I, a lumpen 38 year old woman who has accomplished almost nothing in her years, would feel accustomed to or even comfortable with. The photographer, however, was extremely kind and encouraging and in the end, I started to feel a little more natural.

The next part of the experience was being interviewed by Holly, who is utterly delightful. There is, I think, a bit of a kinship between people who have come through cancer treatment. Everyone’s story is different, but there are a lot of shared experiences to bond over. Having that as a basis to the interview, was a great ice-breaker. It was easy to just outline my experiences and why I think the programme was so beneficial. During the interview, Holly asked me if I’d be OK with my picture being the cover photo of the magazine. She gave me a little time to think, and at the end of the interview, I decided that I was comfortable enough to appear on the cover.

The magazine came out at the end of May and it was really exciting to see it in print. Holly and Sarah sent me copies so I am planning to send one to my Mam who’s on holiday. It feels like a bit of an accomplishment, when really it was just a nice chat! If you’re curious, but can’t find a copy, it’s available on the Happy Magazine blog.

It’s also been a bit of a wake-up call to get myself more active again. Unfortunately my plan for a personal trainer fell through, and a period of insomnia has meant I’m spending my mornings catching up on lost sleep instead of getting out and getting active. If anyone would be interested in being my workout buddy, please get in touch. I’m sorely in need of the motivation, and definitely in need of some more exercise!

Why I’m Glad to be a Cover Girl

It’s feels good to be on the cover because, well, I’m not your typical cover girl. I’m overweight, in my late 30’s and not in the least bit glamorous or beautiful. My appearance is not one you would expect on the cover of any magazine at all! The fact that Holly asked me to be on the cover is probably *not* usual, but I hope it inspires other folks who might not be typical to get out of their comfort zone and do the thing.

I’d like to thank Sarah Wright in the Beacon for being so supportive and encouraging, and Holly Kennedy for being an absolute darling and a force of nature. She’s absolutely passionate about the work that she’s doing for Happy Magazine, and I think it’s a lovely resource for people going through their treatment. So do pick up a copy!

All images on this post are courtesy of Happy Magazine

comments powered by Disqus
IRDN Roller Derby Round Up