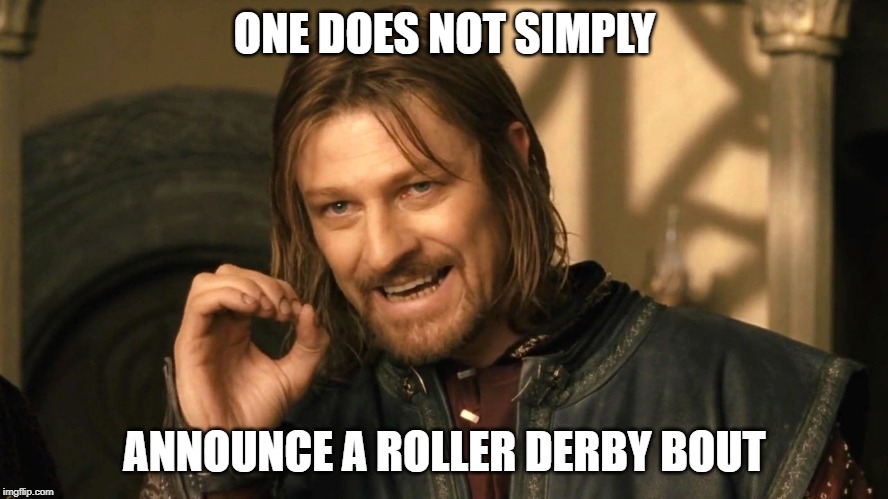 Picture it. You’re at the derby game. There are a couple of hundred punters in the audience, many of whom have never seen a bout before. You have a microphone. The sound is muffled, and the audience can hardly hear you over the music. Ten players and seven referees are whizzing around a track at speed, Players are manoeuvring, blocking, passing and falling, then a referee signals and three players are sent to the box for different infringements – play continues. While you’re scrambling at your programme to decipher the name of the jammer who is left on track, she calls off the jam. By the time you realise, you’re trying to announce it while you’re figuring out how many points she scored and before you can finish your sentence, the next jam is lined up and ready to go – you swear creatively, a five year old gasps. Next jam, you announce that the blue blockers should really try to slow their pack down to give their jammer a chance to score some points – the blue blockers hear you and take your advice – to the absolute rage of the red team. Then you launch into a long, involved story about how funny you usually are – while a botched star pass means that the jammer is sent to the box, the pivot doesn’t know WHAT’s going on, and there’s a jammer switcheroo  – the bench coaches are chomping at the bit to tear strips off the head ref, and because you’re not up to date with the rules you’ve no idea what’s going on, let alone what you should tell the audience. And there’s still 15 minutes left in the first half. Ouch.

Here’s the thing. Announcing a Roller Derby bout is not a situation where you can just rock up to the mic just before the bout and say what you like.

Much of the above scenario is nightmare material, but individually, they are all mistakes that a rookie announcer can make. A derby announcer needs to have a solid grasp of the rules, be able to follow the action in a jam – down to knowing which ref is calling which penalty on which player for which action without “coaching from the mic” or giving away what’s happening before the other team has figured it out. At the same time as following the action, they need to translate it for the audience while keeping them entertained. But they can’t allow their personality to overshadow actually calling the game. Add to that taking direction from the head referee regarding timings, plugging sponsors, charities, upcoming bouts and afterparties, making safety announcements, hyping up the audience during lulls and timeouts while keeping them informed of what’s happening, and keeping vague track of penalties, scores and other game stats – and it’s no wonder that most derby announcers are absolute loop-the-loops.

I’ve announced at six or seven derby bouts at this point, and have an absolute blast each time I do it – AND I learn something new each time. They say that the best way to learn is to do – so I’ve been doing as much as I can, thanks to the awesome Irish leagues who are happy to invite me to announce for them. The next step in learning is to get shown the ropes by a more experienced hand. I was lucky to get to pick the brain of Sven Will I Be Famous when he was over refereeing with the Canny Belters of Newcastle against the Cork City Firebirds and the Limerick Rollergirls in Little Island, and had the privilege of working with the legendary El Toupée when Dublin Roller Derby took on Paris Roller Girls in a double header (that’s him in the blue tutu, isn’t it LOVELY?)

That was an experience that really opened my eyes to what it means to be a “mouth”. The man was on top of all of the action, could read the play and translate it for the audience without giving away upcoming manouevres, and managed to be both rowdy and entertaining the whole while. It was difficult to get a word in edgeways (not that I’m complaining) because I just don’t have the ability to dissect the game that he has gained from years as an NSO, studying the action from multiple angles and learning the rules and the game inside out.

So, now that I’ve experienced the gulf between the announcer I am currently and the announcer I want to be, I’ve got a plan of action. The first step is to put myself out there as available in Ireland. I’m currently one of the most experienced announcers in the country, having been a home announcer for almost all of the bouting leagues – I’ll get the full set on the 28th when I visit Belfast Roller Derby to announce for them in their bout against Limerick Roller Girls.

Next plan is to Watch More Derby – I’ve been pretty lax about this, spending more time watching Battlestar Galactica and Buffy than championships, but to up my game as an announcer, I need to be able to follow what’s going on on the track. This means more derby!

The final part of this stage of my evolution as a mouth is to travel and work with more experienced announcers. I’ve applied to announce at the Men’s Roller Derby World Cup next year. I’m not sure how my application will go, but a tournament like that will definitely attract the best of European announcers as well as some zof the die-hards from across the water – it’ll be time to see the greats in action and learn from them.

One other suggestion I’d make to people new to derby who are thinking of becoming announcers – do a few rounds as an NSO first. You’ll learn about the mechanics of the game and what the referees actions mean and it will stand to you when you are holding a microphone! Other than that, just go for it!

See you all in Belfast on the 28th – followed by Dublin on the 12th of October!